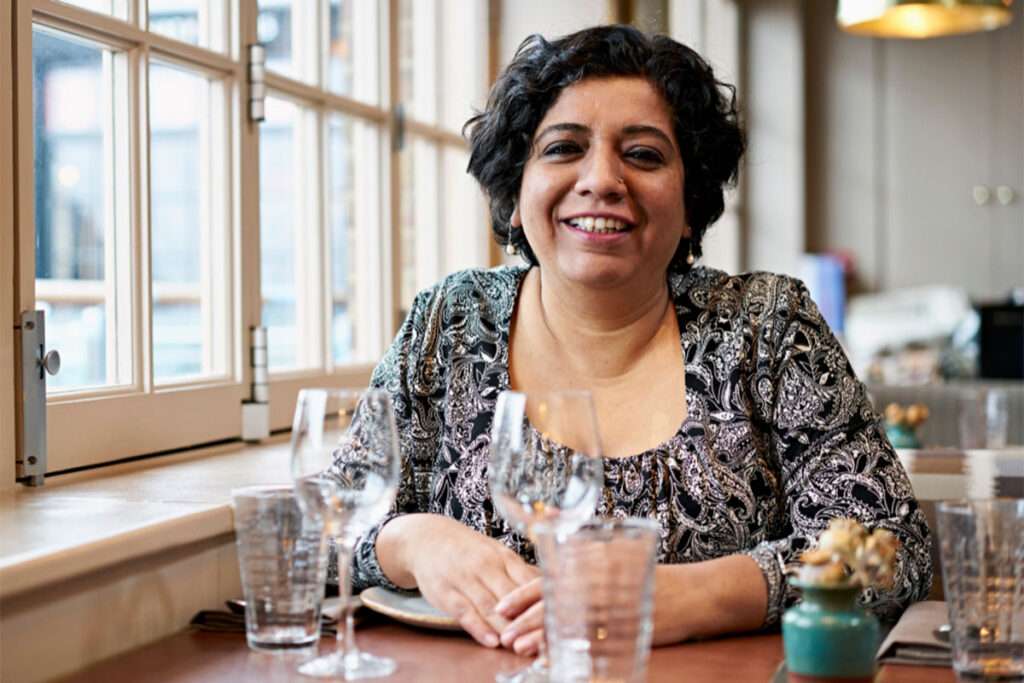 ‘At Darjeeling Express, We Honour The Stories And The Women Who Are Cooking’

Asma Khan’s biryani is famous – you have to pull many strings to get a table to sample it at her acclaimed restaurant Darjeeling Express in Covent Garden, London. Khan is in fact one of the hottest people in food in the UK. In 2017, she became the first British chef to be filmed for her own episode of the Netflix series Chef’s Table.

It is not surprising to learn that her signature style of cooking is influenced by her childhood in Kolkata. The city is, after all, famous for its biryani and biryani fanatics. As she says in an interview last year, “It’s everything that most Indians recognise: what you eat on the streets, what you eat in your house, and what you eat at a wedding. The food of the rich and the food of the poor.”

Khan studied at La Martiniere School in Kolkata before moving to the UK with her husband in 1991. Being a chef wasn’t on her mind at that time – she could not even boil an egg. She picked up cooking skills on her trips back to India, in order to be able to recreate the taste of home in her London life.

The PhD graduate from London’s King’s College got into the realm of food later, while hosting private supper clubs at her London home. She went on to offer lunches at a Soho pub, and eventually started a restaurant that has become a legend of sorts. Last year, Khan had tweeted the picture of Hollywood A-listers Paul Rudd and Dan Levy dining at her restaurant, and it kinda broke the internet. Levy then went on Jimmy Kimmel Live and the late-night talk show host asked him about the photograph and the food they ate. Levy told Kimmel: “That is Darjeeling Express and that is the great Asma Khan, and we had a tremendous meal in London.”

It has been a long journey from the supper club at home to being on Netflix and becoming quite the celebrity chef. Her mother has been a motivating force for Khan. The greatest influence she had, says Asma, was teaching her the importance of generosity and patience when cooking. “She never talked about impressing people and expensive ingredients. It was all about nourishing and healing people, making them feel welcome by feeding them. This is something that drives me, and why I cook. It is the ethos behind Darjeeling Express.”

Food has always played an important role in Khan’s life. Her childhood memories are of eating with siblings – the joy, the conversation and the food they had during the monsoons in Calcutta are all still etched in her memory.

Recently Khan published a book of recipes – Ammu, named after what she calls her mother. It is a story about their relationship and the food that binds them together. The book has 100 recipes divided into five chapters for each decade of her life – from dishes that celebrate her childhood to what she cooks for her children in London today. Khan’s mother had a catering service in Kolkata called Lazeez. She ran it from home, specialising in very sophisticated Continental and Mughlai food, and would cater for weddings and parties. She was also responsible for running the restaurant at the racetrack in Calcutta.

We had a conversation with the chef about her book, her roots and cultural influences, the trip to Iraq for her 50th birthday and her all-women kitchen staff.

Darjeeling Express is known for its exquisite food. What makes your biryani so magical that it ‘makes grown people cry’?

The biryani is magical as it is a very personal family recipe that I make in a very old fashioned way. A lot of my food is presented with a cultural-historical context which makes it special. There has been a huge separation of food and culture, especially in the West. At Darjeeling Express we honour the stories and the women who are cooking. A lot of people get emotional when they eat at our place because it reminds them of their childhood, of a person or a place that may no longer be there. In the busy life that most people lead, it is very easy to forget. One diner left a note telling me that I had taken him to a place that he had forgotten and now his heart yearns to go there again. This is why eating in our restaurant is not a glamorous experience. It is a very emotional one.

What was the thought behind the all-women kitchen at Darjeeling Express?

The all-women kitchen at the restaurant happened organically. Most of the women who work at Darjeeling Express began helping me during my supper club days at home and had moved to England to be nannies. Some were cleaners in care homes and hospitals. They had been in this country for a while and were all on their own sending back almost all their wages to support the family they left behind in South Asia. Helping in the supper club was the first time they were able to cook with other women and it was a time of great joy as most of them were living with European families and did not cook their own food during the week.

And how has having this team of ‘untrained’ women made Darjeeling Express (and its food) different?

The idea that chefs are professionally trained and home cooks are untrained makes me uncomfortable. The multitasking and precision with timing that comes from cooking every day with limited resources in small cramped kitchens is probably some of the best training anyone can have for hospitality. When women who have life experience, who have cooked for their loved ones, cook in a restaurant kitchen they cook as if they are cooking for their own family. They don’t know any other way and you can taste that in the food.

Could we know more about your supper club in the South Kensington apartment?

I wanted to cook and feed people. A neighbour suggested doing a supper club in my home and I knew my husband wouldn’t approve. I waited for him to leave on a work trip and hosted a supper club in his absence. Most of my guests who came to my supper club knew this, and if they met him later they knew not to mention that they sat at his dining table and ate. One time during the supper club there was a huge panic when the doorbell rang and everyone thought it was my husband returning early. There was the folding of chairs and everyone rushing to the kitchen with their plates. We discovered in the end that they rang the wrong bell, but for a moment there was sheer panic and even I was completely worried. I had to clean the house very well after each supper club as I knew that any stain or mark would have made him wonder what happened. This was the bit I didn’t enjoy. But the joy of cooking was so attractive that I continued to host supper clubs in my home.

As a woman in the F&B field, what kind of challenges have you faced?

This is true for every industry, especially if you are an entrepreneur, that men and women do not run an equal race. Ethnicity is a huge factor when it comes to raising money, securing an investment, lease or site for a business. A lot of self-selection happens and I am not willing to accept the excuse of unconscious bias when it comes to how people choose who they will work with or hire. It is so subtle at times that it is hard to pick up.

How did your father’s background from Aligarh and your mother’s roots in Jalpaiguri influence your food?

It was a huge blessing as my father’s family tradition from a wheat-growing area was to have roti in both meals (lunch and dinner), while my mother’s family would eat rice in both meals. This meant that the food that both families ate was very different in texture and flavour. The north Indian food traditions of my father’s family were unusual because it was a mix of Rajasthani and UP. My mother’s mother was from Bihar and had a huge influence on the food my mother cooked. Bihari Muslim food is very unique and very underrated. I was very fortunate that I had all of these wonderful culinary traditions on my table when I was growing up.

At a Bloomberg’s Equality Summit, you had mentioned that “it took a global pandemic, It needed men to fail, needed big chains to collapse for a landlord to get back to me and say, ‘we have a lot of properties, would you be interested in seeing one?'”. Can you elaborate on that?

I only realised after the pandemic had started that the reason I probably was not offered any of the coveted sites by landlords despite me looking for a year and a half for a bigger site was likely because I was a sole female founder. I had to wait for a global pandemic and for men to fail for a kind of flagship restaurant site to be offered to me. It is very worrying because I do have a high media profile and I was financially very secure and could prove it as I had been trading for a number of years. For a female who is just starting out, the hurdles she will face are quite debilitating and if you are a woman of colour it is even harder.

For your 50th birthday, you visited a refugee camp in Iraq. Could you tell us more about that?

I wanted to do something meaningful for my 50th birthday. I had this bold idea of opening a cafe in a refugee camp where Yazidi female survivors of ISIS slavery had been settled in Northern Iraq. I was very fortunate to get the wholehearted support of the founder of the Lotus Foundation who was working with the Yazidis in that area and she facilitated the process of the cafe which we could set up in a camp where they were working with women and children. I knew that food could make women feel empowered and could create a strong sense of community. I felt in the camp where the girls had been through so much trauma, giving them an opportunity to feed and nourish others and to take care of themselves would help on their road to recovery and make them feel powerful again.

The world is seeing such a mass scale of migrations due to climate change, conflict. As someone whose parents have seen the Partition of India, how do you think food cultures and memories get affected?

Food memories are very powerful and memories of taste and aroma and conversations are something we carry in our DNA. When so much is lost in conflict and families are uprooted, food is the one thing that they can recreate in the homeland, be it a new country or refugee camp. It is the taste of the home they may never go back to.